I am working on a project concerning archive and memory prompted by family albums of photographs taken in Southern India between 1889 and 1924.

It is deeply rooted in India’s colonial past in what in southern India is now usually referred to as ‘the British times’. It touches memory and archive and at this early stage, it remains to be seen how it can and will develop.

Lionel Edward Kirwan, who travelled to India in 1889  become a coffee planter and  took many photographs,  in particular, of the Santawerry and Arabedicool coffee estates the surrounding countryside near  Chikmagalur in the Western Ghats.  He also had close associations with Coonoor, Ootacamund and Chennai (formerly Madras); he was on the editorial staff of the ‘Madras Mail’ and secretary of the Madras Agri-Horticultural Society.

I spent last August finding the precise locations of these historic photographs together with photographer Simon Pruciak with the aim of  re-photographing them.  Starting in Bangalore where Lionel is buried, we travelled near Chickmagalur, visiting the coffee estates which Lionel once owned and  staying in one of the plantation bungalows where he once lived. We then travelled to other places he photographed such as Jogg falls Gorsoppe,  Koppa,  Madakari, Mysore, Coonoor, Ootacamund,  the Nilgiris hills and then Chennai, before returning to Bangalore.

We now have about 200 4×5 photographs and about two thousand digital images. 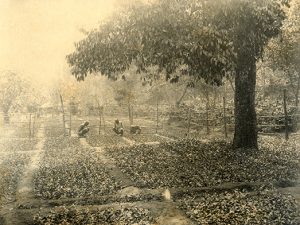 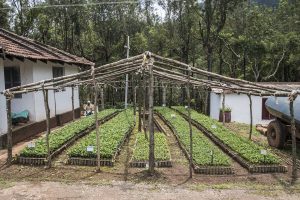 ‘Nurseries’ where small coffee plants are nurtured :  photographed 1900 and 2017